For Barcodes, The Best May Be Yet To Come 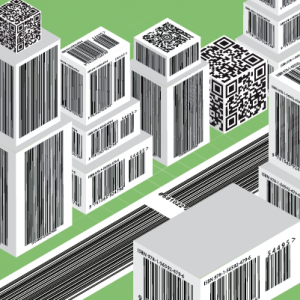 Barcodes are ubiquitous around the world. They’ve been a mainstay of grocery stores for decades, and in the past ten years, found on mobile phones and advertising. But the history of barcode technology goes back much further, and the use cases for it continue to evolve.

The genesis of the barcode can be traced back to Harvard University in 1932 where a student project proposed that customers could select goods from a catalog by pulling a corresponding punch card, which was handed to someone who placed the cards into a reader. This would facilitate the desired goods to be pulled from the storeroom and delivered to the checkout counter.

This scenario is not quite what we have today when we buy our groceries. Rather, the system to automatically read production information from the packaging at the checkout counter was developed in the late 1940s by a grad student at Philadelphia’s Drexel Institute of Technology and a patent issued in 1949. However, the bar code wasn’t commercialized until more than 15 years later when the National Association of Food Chains put out a call for a new system to speed up the checkout process.

More than 40 years after initial conception, NCR Corp. debuted the first UPC scanner in 1974 that was installed at a Supermarket in Troy, Ohio to scan a pack of Wrigley’s Juicy Fruit.

Lots More to Chew On

The use of barcodes in grocery stores has become somewhat invisible to the everyday shopper, except on the rare occasion when a reader is unable to scan the product. And UPC codes not only enable faster checkout, they connect back to inventory and supply chain systems to allow stores to have a better understanding of what is selling and what needs stocking.

Additional value has been built on the barcodes found on foodstuffs. The same UPC code that allows the right price to come up at the cash register also enables the shopper to scan with the camera in their smartphone; they can get the nutritional information and feed it into a calorie tracker to more easily follow a health regimen.

Beyond the Kitchen Table

It’s not just items at the grocery store that have barcodes, of course. Go to almost any retailer, be it for tools or toys, and the product will have a barcode that will be scanned at checkout. Barcodes have infiltrated pretty much any shopping experience, save for the small corner store or souvenir shop.

Books are an excellent example of the expanded functionality of barcodes. Every book has its own unique International Standard Book Number (ISBN). Even the same title has a different ISBN depending on the edition or the format – hardcover, paperback or ebook. And just like the barcode on a can of soup, you can now scan an ISBN barcode with your phone to get more information – a review, perhaps, or even ability to add it to an app or wish list for later purchase.

Barcodes are not just used for consumer goods. They can be used to track other objects such as mechanical parts, medication, and medical devices. In the case of the latter, there have been efforts in recent years to set up systems to track and trace medical devices and products throughout the supply chain. Among the benefits are the ability to meet regulatory requirements, support patient safety, facilitate product recall and withdrawals, manage logistics and ensure quality.

Barcode Reading for the Masses

With the development of the smartphone, barcode technology has become easier to use as it no longer requires proprietary or dedicated hardware. Some businesses have been able to let their employees use their own devices to manage storeroom inventory, for example, rather than invest in purpose-built barcode readers.

This software approach to barcodes has also made other use cases more prevalent, particularly those that do not involve a physical good. The QR code is a form of 2D barcode that has popped up on advertising in public spaces such as bus shelters and subway cars, as well as in newspaper and magazine ads. By using an app on a smartphone, users can scan the QR code to learn more about the product or service advertised, or even enter a contest.

And just as the Internet has made it easier to buy tickets to events such as concerts, baseball games, and movies in advance, barcodes have made it possible for online ticketing and admission to be completely paperless. Rather than printing out the ticket at home, attendees can display a barcode or QR code in an email, PDF document, or mobile app to gain entrance into a venue.

Because barcode technology is now very much software-driven, developers are now incorporating barcode reading functionality into applications. For example, smartphone applications that aren’t dedicated solely to reading barcodes include scanning functionality. The Amazon app, for example, allows users to scan barcodes of many products, including books, DVDs, and video games, so that you can find them on its site. And if you want to easily track what you ate, you can scan the barcode on that chocolate bar so your Fitbit can prompt you to walk it off.

Although widespread, many small businesses still don’t use barcodes, but with the cost of barcode scanners dropping, and the functionality becoming widely available in smartphones, adoption is likely to increase, and new use cases discovered thanks to the Internet of Things. Long term, barcodes may no longer look like they do now, and instead information will be gathering by scanning the packaging or brand logo itself.

The future of the barcode may still be ubiquity, but it could also be invisibility.

Gary Hilson is a Toronto-based freelance writer who has written thousands of words for print and pixel in publications across North America. His areas of interest and expertise include software, enterprise and networking technology, memory systems, green energy, sustainable transportation, and research and education. His articles have been published by EE Times, SolarEnergy.Net, Network Computing, InformationWeek, Computing Canada, Computer Dealer News, Toronto Business Times and the Ottawa Citizen, among others.