How to Remove Dependencies to Speed Up Release Time

One of the challenges facing modern software development is what I have often heard called shifting sands. It means the differing pace of revision in the software you rely on. Sometimes revisions can impact your sprints.

For Accusoft’s specific case in SaaS QA, the fast pace of Chrome and Firefox development means putting in a request with IT to update a Teamcity agent, who would then prioritize it for a future sprint.

This could mean waiting weeks for changes, and in one case, we had fallen behind 2 versions of Chrome and our browser was no longer compatible with the Chrome driver.

Now expand this problem to all the other dependencies we had such as NodeJS, Java, OS version, and you quickly have a maintenance nightmare.

To solve this issue, I started exploring the use of running our test suite in a Docker container so that we only needed an updated Teamcity agent when Docker updated.

In this article, I discuss how to solve this dependency issue and speed up release time with code examples from this experience. 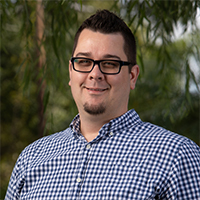 Noah Kruswicki, Software Development Engineer in Test (SDET) III, has been with Accusoft since 2016. With a degree in Computer Science from Lakeland University in Sheboygan, WI, Noah prides himself in his career accomplishments. Noah has led many automation efforts and introduced several new ideas into Accusoft’s testing on teams including SDK, PrizmDoc Cloud, OnTask, and internal development. In his spare time, Noah enjoys watching the Jacksonville Jaguars, Milwaukee Bucks, and the Wisconsin Badgers. Additionally, Noah spends time paddle boarding and is a self-proclaimed local foodie.