At Accusoft, we believe in working hard and building each other up. But that doesn’t mean that we don’t all enjoy some friendly competition every now and then. Accusoft’s Event Ninjas is a group dedicated to employee culture, involvement, and activities.

Throughout the year, the group comes up with fun and innovative ways to engage employees with company sponsored events like the annual chili cook off, Halloween decorating contest, theme days, and more. Recently, the Event Ninjas started the annual Office Olympics, where departments band together to compete against each other in various games and tournaments throughout the week.

“The Event Ninjas host this event each year as a fun and creative way for employees to share in the collective success of winning each of our events as a team and, hopefully, the title of the Office Olympics Champion,” says Alissa Waters, HR Generalist at Accusoft. 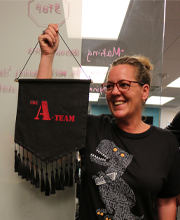 On Tuesday morning, competitors lined up for the first event of the week. Each competitor faced an opponent for five rounds of rock, paper, scissors in the HQ atrium. The competitor with the best score out of five rounds advanced to the next tier of the tournament, where the participants dueled it out for the championship title. In the end, it all came down to concentration and skill. Congrats to the customer relationship team for taking 1st place!

On Tuesday afternoon, the games resumed with the Online 8-Ball Pool Tournament. This online two-person game had two players battle it out to win a game of online pool. Winning competitors advanced through the rounds of the game until an overall winning team was announced in the final. The games were close, but only one could be victorious. Congrats to the support team for taking 1st place! 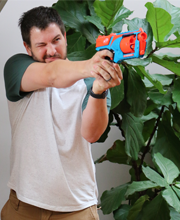 The next day of Office Olympics started with Nerf Gun Archery on Wednesday morning. Teams of two used Nerf Guns to shoot 12 darts (six per employee) at the paper dartboard on the glass wall of the HQ atrium. Each dart earned points based on the spot it landed on the dartboard. The team with a score closest to 301 won. It was close, but the champions prevailed. Congrats to the SDK team for taking 1st place!

That afternoon, the games continued. In the Coffee Cup Dash, each competitor raced through the obstacle course with a very full cup of coffee. The cup of coffee had a maximum spill line so if the competitor spilled below that line they either returned to the start line to refill their cup or were disqualified from the competition. The competitor who reached the end of the obstacle course in the fastest time without spilling below the spill line won the title. This one was tough, but the teams took it in stride. Congrats to the marketing team for coming in 1st!

On Thursday morning, the final event commenced. In the Accusoft High Jump, each competitor got into a Velcro suit and took one jump onto a Velcro sticky wall. While jumping, the competitor stuck their team arrow as high on the wall as possible. The team with the highest arrow won the contest. Congrats to the support team for taking 1st place! 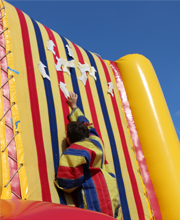 After the final event, the champions of the week were announced in a closing ceremony. We reflected on the week’s fun activities and gave out the trophy for the overall champion. We also enjoyed a free icee truck to celebrate.

“The Office Olympics event is an exciting way for employees to take a break from their desks and enjoy a variety of lighthearted games while team building and creating lasting memories at Accusoft. It’s part of what makes this company an awesome place to work!” remarks Waters.

In the end, the support team came out as the overall 2019 Accusoft Office Olympics victors. Next year, it could be a different story. We’ll have to wait and see.