Intro to Node.js: There’s a Module for That! 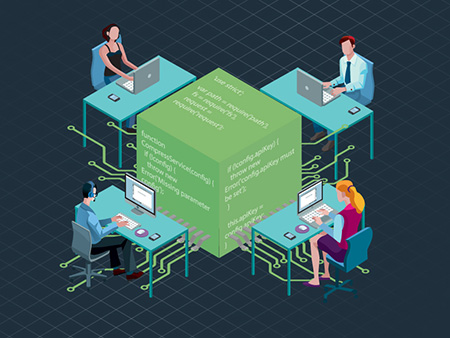 Welcome back to our introductory blog series on Node.js. If you’re just joining us today, be sure to check out our previous post on what makes Node.js so popular. Today, we’re going to tackle modules.

Are you familiar with the saying, “there’s an app for that”? Well, with Node.js, there’s a module for basically everything that you might consider doing, aside from whatever your value add is. If you want to develop a certain product, all of the support and tools you need to build it are there, you just build your logic. Below we’ll talk a little bit more about the built-in and open source packages available with Node.js.

For anything that’s not built-in to Node, developers can turn to the open source community. Originally created as a package manager for use with JavaScript and Node, npm now supports a variety of packages—there’s now over a quarter million open source packages in the npm repository. You can also take the npm software and run a local repository, so you can have all of your own code sitting at an npm repository. That’s ideal, because if you tell npm to pull down a module and it can’t find your local repo, it’ll go out to the public one and find it. It’s pretty transparent; you do a pass through and your libraries come first.

You can also take a lot of the same libraries and run them directly in the browser because, again, it’s JavaScript. So if you pulled down a library that does something interesting—a lot of people have used jQuery, Underscore, or any of those on the client side—all those same libraries can be pulled down via npm and used on your server-side code. This offers the same functionality with combining objects and arrays. We can take a lot of the shortcuts we use in the client world and apply that same code on the server side.

When it comes to Node.js, it’s all in the modules. For the most part, this platform offers all that you need to build your product, you just have to add your logic. Eager to learn more? Stay tuned for our next post in the series where we’ll talk about what makes Node.js different and when you shouldn’t use it.