Created in 1972 by Pitney Bowes Corporation, Codabar was designed for enhanced readability and simplicity. While the basic Codabar format is not protected by trademark, there are specific versions — such as the hyphenated Code-a-bar — that are protected by registered trademark. This format was designed for easy printing even on dot-matrix machines or impact printers, making it both reliable and functional. This barcode type is also known as USD-4, NW-7, and 2 of 7 code.

Codabar characters are encoded using four bars and three spaces. The bars are of varying widths — two wide and two narrow, giving rise to the “2 of 7” designation. Codabar also uses a fourth space, called the “intercharacter space” which separates barcode characters but does not form part of characters themselves.

Available Codabar characters include the numbers 0-9 and six symbols:

It’s also worth noting that while every Codabar barcode must contain a pair of start/stop symbols, there’s no requirement for these symbols to be identical. If “A” is the start character, any of B, C, or D could act as the stop character. This lack of standardization is one reason for the shift away from Codabar, since differing start/stop patterns could lead to confusion around character encoding and potentially lower barcode integrity. 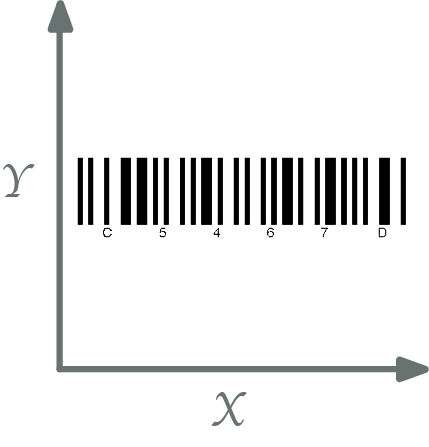 While many industries have phased out their use of Codabar in favor of other formats capable of encoding larger amounts of information more accurately, Codabar is still used in many libraries, blood banks, and package delivery services thanks to large amounts of existing infrastructure investment.