Also called the Industry 2 of 5 barcode or simply Code 2 of 5, the Industrial 2 of 5 symbology has been in use since the late 1960s to encode information for airline tickets and warehouse sorting systems. All information contained in this barcode is stored in the bars themselves — the white spaces are only used for separation. As a result, this code is considered inefficient when compared to newer symbologies but remains popular thanks to existing infrastructure built specifically to read these codes.

To encode information, five bars are used for each character. Two are wide and three are narrow, giving rise to the name “2 of 5”. Unlike more recent barcode formats, Industrial 2 of 5 only supports numeric characters 0-9.

Industrial 2 of 5 often contains human-readable text printed just below the barcode itself, but this isn’t mandatory. To ensure these codes are read properly, they must contain six format elements:

Because Industrial 2 of 5 is a self-checking barcode, it does not require a checksum, but it’s possible to use a modulo 10 checksum if needed. Including any non-numeric characters in the barcode will typically return a reader error. 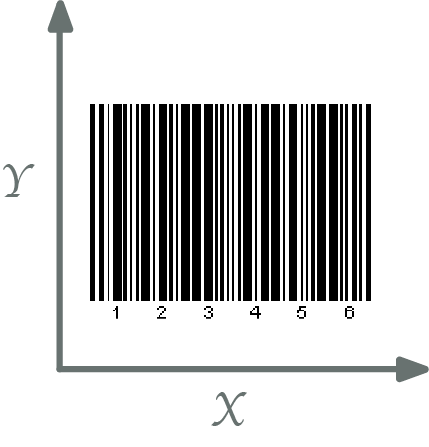 Despite the development of newer barcode symbologies capable of utilizing both spaces and bars for information encoding, Industrial 2 of 5 remains popular across both airline ticketing and boarding pass systems. It’s often used for industrial applications such as inventory tracking and warehouse management. While it lacks the density and adaptability of new barcodes, Industrial 2 of 5 provides both the reliability and accuracy, making it a popular choice for large-volume numeric-only information encoding.