The Interleaved 2 of 5 barcode is a numeric-only code that’s commonly used in warehouse and industrial applications. Also known as ITF-14/SCC-14, Interleaved 2 of 5 is considered a high-density barcode since digits are encoded in pairs or “interleaved.”

Because the encoded digits in Interleaved 2 of 5 occur in pairs, the code must contain an even number of digits. If an odd number of digits occurs, a leading “0” is added to the first code value. While Code 39 is also a potential option for industrial barcoding, many companies choose Interleaved 2 of 5 since it’s possible to encode the same amount of data in approximately half the required space.

Similar to Code 2 of 5 and Industrial 2 of 5, Interleaved 2 of 5 uses two wide bars and three narrow bars (2 out of 5) to encode data. Unlike its other 2 of 5 counterparts, however, Interleaved 2 of 5 also uses wide and narrow spaces to enhance information density. It’s worth noting, however, that the non-standard length of this barcode type could pose potential security problems. As a result, many companies choose to standardize their barcode length or use the optional check digit to ensure barcode accuracy. 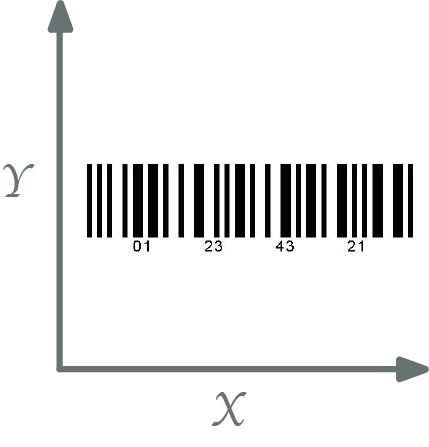 The high density and unlimited character length of Interleaved 2 of 5 make it ideal for large-scale industrial operations. Variants of this barcode type — known as Identcode and Leitcode — are also used by Deutsche Post for mail delivery, inventory, and sorting.